13 Sep The devil is in the details… and the pictograms!

The chapter of the Tokyo Olympic and Paralympic Games has just closed.

During the Opening Ceremony, the Olympic Games took special care in the presentation of their Olympic pictograms, giving a specific time to their “live” presentation.

Created by the Japanese designer Masaaki Hiromura, the 50 drawings (made by a team of designers who worked two years on the project) were presented one by one, thanks to a “human animation” imagined by HIRO-PON, Japanese silent comedy artist and member of the Gamarjobat company. 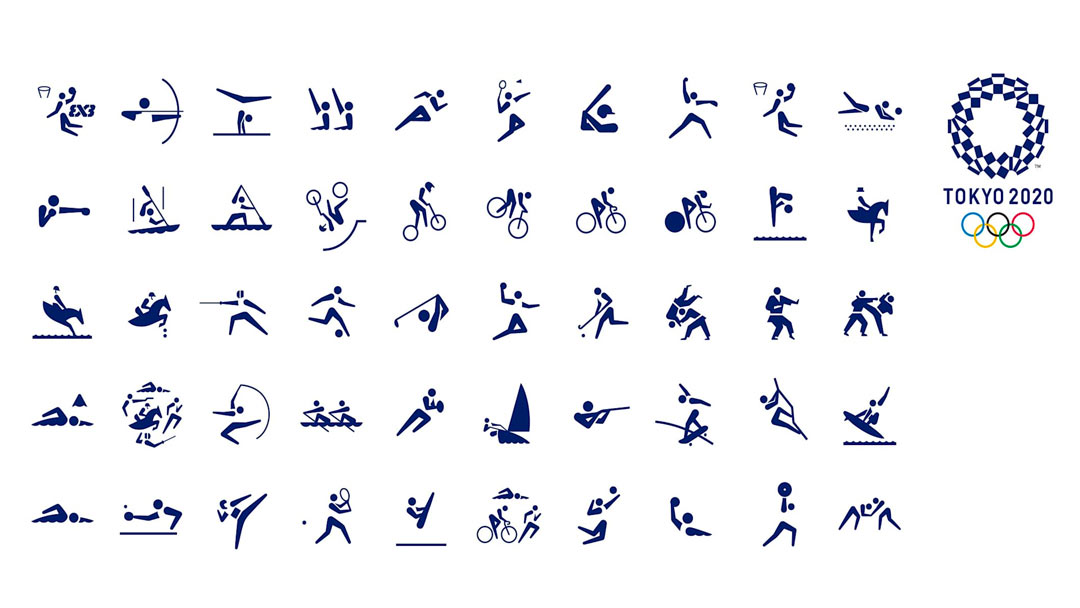 The official sports pictograms of the Olympic Games are of major importance and used in many fields: signage on the competition sites, decoration in the host capital, licensed products, posters, tickets, guides, etc.

What is a pictogram anyway?

Formed from the Latin picto (painted) and the Greek gramma (letter or writing), a pictogram is a schematic drawing intended to be as easily identifiable as a letter of the alphabet and used for communication purposes. Pictograms are not only found on mobile applications and websites. They are everywhere! Road signs or packaging symbols work on this principle…

For the anecdote, the pictograms of the Olympic Games were really born in 1964… in Tokyo! The explanation is quite simple: the Japanese were confronted with a serious language problem since nobody spoke Japanese outside Japan! So they had to find a non-verbal communication system that would work for the whole world and be intelligible right away. Nevertheless, Swiss illustrator and author Marcus Osterwalder says that “making symbols that are not letters but graphic illustrations that everyone can understand goes back a long way. I found small pictograms present at the Stockholm Games in 1912, at the Paris Games in 1924, and at other Games afterwards, but they did not yet offer this very simple, very clear view that we know today.”

The origin of the pictogram is however much older! The first of the kind date from approximately 30 000 years B.C. … Thay are the pictorial signs, in the form of wall paintings which you can find inside the cave of Lascaux, in France. If we still do not know the reason why these 6 000 images were painted, one thing is for sure: they were intended to communicate a precise message. Nowadays, a language derived from the pictorial signs still exists: Chinese.

But why give so much credit to a pictogram? Why take so much care to personalize it? Why does each country hosting the Olympic Games go to the trouble of creating its own symbols? Especially since it is now easy to find “ready-made” and ready-to-use pictograms on the Internet… If it is primarily intended to facilitate navigation on a website or an application, the pictogram is also an element of differentiation, of brand signature. Just like a logo or a base line, it is an integral part of the graphic charter. It allows to sign a brand territory and to distinguish from the competition.

That’s why, within Fifty Bees group, all our pictograms are unique, straight out of the imagination of Joel Alessandra, author of comics and graphic novels. And what we have created for ourselves, we can build for you… So, if you want to rework your graphic charter, make your logo evolve or create your pictograms, you know what you have to do!

Talk to you soon 😉