Who’s best suited than you to launch your brand ? You know your product or service, you’ve studied the market to target your clients and have loads of great graphic ideas to create a logo & highlight your know how…

Is it that certain ? Because, though you’re full of sparkle, ambition and creativity, it is very hard to have the necessary distance when you ride like a maniac and when actions to set up are beating down the doors…

This scenario is not left to SME only. Soft Drink giants such as Coca and Pepsi has had to bear with it in the past and can actually be included in the Top 10 of total failures in the field of communication !

Let’s start with Coca… In the mid 80’s, while the brand is historically fighting to gain the podium over Pepsi, its arch enemy, Coca develops a new recipe to fight back the scathing attacks of its opponent.

As a matter of fact, as far as market studies are concerned, if Coca remains the consumers’ favorite brand, the taste of Pepsi is acclaimed by the public. The brand is losing ground. So, on April 23rd, 1985, Roberto Goizueta, then CEO of The Coca Cola Company, announces the launch of New Coke, along with the motto « The Best just got better ».

Instead of the anticipated success, a public and medias outcry : Coca cannot be changed ! The switchboard of the brand crashes after the too numerous calls of furious consumers. Stock shares drop dangerously. Shops are being raided in order to stock « normal » Coke for fear of its disappearance. 79 days after the launch, New Coke is withdrawn from the shelves and replaced by Classic Coke – the initial formula. 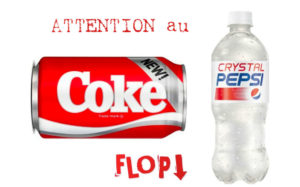 However, on paper, the formula was perfect : the taste of Pepsi combined with Coca brand was to enable to match the demand of Americans and win the trophy of the best cola…

Pepsi then thought they had won the war… In 1993 though, the historical rival trips over because of a major communication mistake : Pepsi Crystal.

While being neither odorless nor tasteless, this new cola presents a particular feature – last but not least : it is colorless. A phenomenal revolution in the colas sector ! Pepsi only removed the colorant which gives the drink its caramel hue. The taste remains very similar.

No colorant and just as much taste, at a time when appears a trend for « clear » products (transparent) along with a start of interest for the planet, the formula is conceived as a magic one ! Majestic launch at the Super Bowl, with the motto « You’ve never seen a taste like this ».

Unfortunately, consumers don’t share this view and pretty soon turn their backs on the product : a cola must have the brown hue of a cola. A clear cola is suspicious… After a few unsuccessful attempts to relaunch, Crystal Pepsi is, in turn, removed from the shelves. A drink the color of which France will never see…